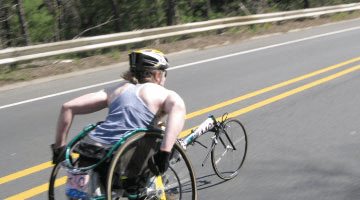 Tilly Hatcher ’94, Paideia alumna and recent graduate of Harvard Graduate School of Design with a masters in urban planning, ran the Boston Marathon on April 16, 2012. She documented her experience and shares it with us.

These pictures, maps and stories come from a document I created to share with everyone who encouraged me along the way. The affirmation I have felt from new and old friends has been staggering, and I wanted to send out a massive thank you. Many passed it on to people I have never met, which makes me happy because ultimately it is a story about the power of a stranger’s goodwill.

In the weeks leading up to the marathon, I felt like everyone I passed on the sidewalk was giving me a psychic high five. How did they know? I wondered. But I have since realized they were reflecting back the joy they sensed in me, multiplying it. I firmly believe that this goodwill would have been lost if we had all been in cars.

I lived car-free in Cambridge for two years, and now that I’m back in Atlanta, I’ve enjoyed keeping up the habit. It’s easier than I thought it would be, and I’m excited by the strides Atlanta is making to become more walkable. As part of this story, I had made some maps showing my walking range in Cambridge, and I just added one of Atlanta!”

The Morning of the Marathon 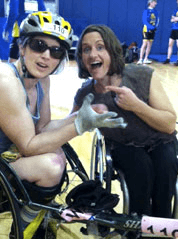 “I set my alarm for 4:30. Woke up at 3:00 and lay in bed for an hour listening to my heartbeat. A friend picked me at 5:30 and dropped me downtown where I got on a bus for Hopkinton. The turnpike was closed for regular traffic--just a convoy of buses! I took a nap using my camel bag as a water pillow. It was unnerving how long it took to drive out there.

The gym was full of wheelchair racers from all over the world. Jason Fowler and Cheri Blauwet, both world-class athletes, helped me get my chair ready for the race. I am lucky.

For me, it was never a race, just a ride, so I relaxed a little when I lost the pack on the first uphill stretch. From then on, I was on my own adventure, taking part in a 116 year-old tradition. The night before, Spaulding had a pasta dinner for all of the runners on their team, and someone said the marathon was like one big block party. I love that. That’s exactly how it felt.

Except that I had never been to a block party with thousands of people cheering for me. Imagining how that would feel made me cry, so I took a dishtowel with me so I could wipe my eyes (see it in my lap?). It didn’t turn out to be a problem, though. My body was in fluid conservation mode. [photo(8)]

I could tell the moments when I would have cried, like when I passed by the Wellesley Scream Tunnel. I had been warned that it would be amazing, but nothing can prepare you for feeling that celebrated. Their cheers followed alongside me in a wave. Just for me? Unbelievable.”

“It doesn’t look like much of a hill, but it sure felt like one. My friend Alex Koumoutsos took these pictures near the finish line. When I saw them I was surprised at how much I look like a legitimate racer. I didn’t see him at the time--the crowd was so loud it sounded like static in my ears, but I did see some friends along the way. Some I hadn’t seen in years. Mary Dixey jumped into the road in Framingham yelling ecstatically, “I have your sister on the phone!” That was another moment when I would have cried, reminded of all my family and friends who were thinking of me and wishing me well. Did I mention how lucky I am?

As you can see, I had the crowd to myself, coming twenty minutes behind the last racer and before most of the runners. (I got to cheer for a handful of the elite women as they passed me on the Comm Ave hills.) It was utterly surreal. I felt like I was running for mayor, smiling and waving to everyone on the downhills. I pushed hard on the uphills, but I was even smiling then. How can you not, when people are telling you you’re awesome?” 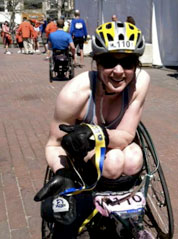 “Jason and Cheri were waiting for me at the finish and they gave me a bag of chips (salt!) and a medal. There is a place on it where you can engrave your time. I finished in less than three hours, (2:52:54), which was the quick end of what I thought I could do. Jason thought I could do it in three, but with the heat, I thought I would be slower.

Unlike the runners, who really suffered from the heat, it wasn’t an issue for me because I got the folks at the water stations to dump water on me and I could cool off on the downhills. I couldn’t hold the cups with my gloves on so I asked them to pour water in my mouth, too. It was fun to get their help. Some were really good at it and when they weren’t it didn’t matter because it felt good to get soaked.

I also asked a couple of strangers to help me fix my ponytail just before the big hills. One of them held my helmet and kept my chair from rolling while the other tied my hair. When I got going again everyone cheered. :] So much goodwill!

Shortly after that, I heard a woman say, “You have such resolve!” At the time I was simply amused by her distinctive choice of words, but the memory has stuck with me like a little present. A big present, actually.

Another memorable moment was on Heartbreak Hill. People on the median were playing “Push It” by Salt and Peppa, and I was pushing to the beat while a group of soldiers were cheering me on. They walk the 26 miles in uniform with giant backpacks!

After I finished, I joined folks from Spaulding who were having a party in a hotel overlooking the finish line. All the runners had a change of clothes waiting in a fancy suite upstairs where we could get cleaned up and have a massage! My biceps got a little dirty from my tire, but it didn’t get bruised.”

“Last summer I got interested in trying a racing chair after I had a blast doing a 5k in my everyday chair. I found out that Spaulding Rehabilitation Hospital’s adaptive sports program had a bi-weekly ride along the Esplanade with hand cycles and racing chairs. That’s where I met Cheri, Jason, and a bunch of other wonderful people.

I tried Jason’s old chair, but my hips wouldn’t fit. The chairs are made to fit tight so they function like an extension of your body. There was not a chair that fit me available, so I used a handcycle and couldn’t have been happier. I love handcycling. I was still curious about racing but figured it could wait.

Fast forward to December: Cheri called to ask if I wanted to train for the marathon. Spaulding had asked Jason and her to be on their team but she couldn’t do it, so she thought of me! They would have a chair made to fit me, and Jason would teach me how to use it. I could wait until I got the hang of it to decide if I was up for the doing the marathon. I couldn’t believe it!

I started thinking of myself differently—like I was someone who was potentially capable of this challenge. It took a while to get the chair, so in the meantime I used it as an excuse to have all sorts of fun—cross training. :] I went downhill skiing up in NH with Spaulding, went swimming, walked for miles instead of taking the T, and started using a Burn Machine. (If you are looking for a good cardio/arm/core workout, I highly recommend the 4-pound Burn Machine.)”

“You climb into the chair from the back, feet first, and you have to lean forward once you’re in it, so it won’t tip over backward. You do a wheelie to steer when you’re moving slowly (inside the apartment, going up hills), and at faster speeds you turn the front wheel with the bars (A). The V-shaped piece between them (B) can be adjusted for consistent turns like on running tracks or for cross slopes. My feet rest on the swing with the yellow strap (C) and the black band above it holds my knees up (D). Jason rigged my camel bag so I could grab the tube with my gloves on and drink on the downhills (E). The push rims (F) are smaller than an everyday chair, so you can still push at faster speeds, though it makes hills harder.

I got the racing chair about 6 weeks prior to the marathon. Three weeks into it, I was still making adjustments to get the chair to fit me right and wasn’t sure I could be ready in time. Then I saw a quote that I’ve been unable to re-find online, so I don’t know who said it first: “You succeed at something the moment you commit to it.” That struck a chord, so when Jason said he thought I could do it, I didn’t hesitate.

Last summer the marathon was not on my radar, but my training really started then, when I got into the habit of walking to and from work at Sasaki—a 3.6 mile commute. (The whole year before that, I lived without a car, so I was used to walking a mile or two at a minimum each day and often twice that much.) Once I got used to zipping between Cambridge and Watertown, why not to Arlington, Brookline, or downtown Boston? As I got stronger and faster, I felt like I could claim more and more of the city as my own. I made some maps that illustrate this. Three cheers for walkable cities!”