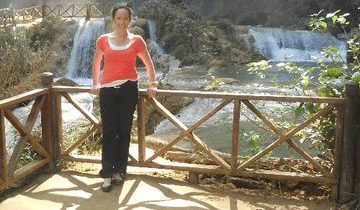 Shannon Van Sant ’95 is a documentary filmmaker based in Beijing, China. Last year she had the opportunity to follow and film a group of North Korean refugees as they escaped through China, Laos and Thailand.

One of these refugees was a 16 year-old boy. Throughout the time she spent interviewing him she thought of how unaware she had been at his age of the suffering others have to endure simply because they have the misfortune of being born in one of the most repressive regimes in the world. Shannon said, “At 16, Minkyu had experienced more of life and hardship than I ever will.”

“I hope sharing his story will open the eyes and hearts of current Paideia students and alums to the experiences of one North Korean boy that are reflective of the reality millions of North Koreans live through every day” also stated Shannon.

Over China’s annual October holiday I traveled to Seoul, South Korea, to research a story I wanted to report on North Korean refugees. My goal was to focus on the most vulnerable refugees: women and children who were crossing the border into China. For several days I immersed myself in the impassioned and sometimes strange world of journalists, UN representatives, activists and missionaries who focus on North Korea.

One South Korean pastor invited me to film the rescue and escape of a group of refugees. This pastor employs a shadowy network of drug and human traffickers and missionaries in China who are skilled at evading police checks as they bring North Koreans via bus, train and taxi to China’s southern border. It is a very dangerous trip. If caught during their journey, refugees are deported back to North Korea, where they face certain imprisonment in a hard labor camp and sometimes execution. I was told that Chinese policemen and Chinese citizens are awarded a bounty prize of several hundred US dollars for turning in North Korean refugees. The refugees are not safe until they reach Thailand, where they can seek asylum at the South Korean embassy.

The South Korean pastor gave me a phone number for a man named “Joshua.” “It will take several days for Joshua to bring the refugees from Yanji [a Chinese city near the North Korean border] south to Yunnan Province. If Joshua succeeds you can meet them there in a safe house.”

A week later I received word that the refugees reached Yunnan and I booked my plane tickets. I had been to this part of Yunnan before. Palm trees lined the streets; elephants roamed the local forests and valleys. It is a popular vacation spot in China, but the relaxed vibe belies a darker side to the area. Like many of China’s border regions, the drug trade and human trafficking play a significant role in the local economy.

This was where I met the refugees, in a small two bedroom apartment. Two women, one 19 and the other 29, greeted me at the door. They had been sold into China’s sex trade and with the missionaries’ help escaped the brothel where they had been held. The women were gregarious and outspoken. Minkyu seemed like a third wheel, and I wondered what he thought of the women refugees he was traveling with. He wore red soccer shorts, a black t-shirt and tennis shoes. His arms and legs were too long for his small frame, and I wasn’t sure if his awkward build was due to lack of food or teenage growing pains. For the first several hours he wouldn’t look me in the eyes. “You look so strange,” he later told me. I was the first Caucasian he had ever met.

Eventually I persuaded him to sit with me for an interview. I promised him I would disguise his identity. “If the North Korean government learns that we have escaped,” the refugees told me, “three generations of our family will be killed.”

Minkyu grew up in a small village near the border of China. His family planted potatoes so they could have food to eat. “We ate what we were able to grow in the fields,” Minkyu said. “If a family could afford to buy rice, that meant they were quite wealthy.” At several points during our conversation Minkyu would pause, start crying, take a deep breath and then continue his story.

Minkyu’s parents were divorced, and his mother had remarried. “My stepfather loved alcohol,” Minkyu said, “And I wasn’t able to relax at home. Whenever I heard my mom and that man fighting, it was always about me. It's all because he didn't like me.” As Minkyu grew older he says the physical and verbal abuse from his stepfather became worse, and he sought refuge at his grandmother’s house nearby.

One time his grandmother said she wouldn’t be at home. “She told me she was going to my uncle’s place, and then she never came back. Both my grandmother and uncle disappeared.” Months passed, and Minkyu longed for the grandmother who had offered him protection before.

“Then two years ago strange men began approaching me on the village streets when I was outside with my friends. They told me my grandmother was calling for me, and that she had sent them to take me to her. These men came every month, sometimes every week. They talked with my neighbors and called out my name. They always said the same thing, ‘Your grandmother is calling for you.’ When I asked the men where my grandmother was, they said they couldn’t tell me. My mother forbid me to go with them. She did not want me to leave the house.”

“But the abuse at home was getting worse and worse, and one day, when the last guy came calling my name, I decided to go with him.”

“I couldn’t take it any longer. I knew that if I stayed in North Korea, my future would be destroyed. Whenever I go through tough times I think about my grandmother. That day I was really missing my grandmother. So I began my journey.”

In the middle of the night the man, a human smuggler, took Minkyu to the Tumen River which divides North Korea and China. North Korean guards line the border and are instructed to shoot anyone they see crossing. It was August 2010. “The river waters came up to my chest,” Minkyu remembered, “As I was crossing the river, I thought, ‘This is it. This is really, really it. I can’t turn back now.’”

“In North Korea I only knew Kim Jong Il, our dear leader,” Minkyu recalled. But soon after crossing the border he “realized everything I had been taught in North Korea was a lie.”

“I couldn’t believe it when I saw people feeding their dogs. I was in shock that people had enough food to give to animals.” Minkyu knew very little of the world outside North Korea.

“In North Korea if people are caught watching illegal television shows, we are sent to hell,” he told me. “What do you mean by hell?” I asked. “We are sent to prison, which is the same thing as hell,” he explained.

The human smuggler brought Minkyu to Joshua and the missionaries, who then brought him and the two women to southern China. During their journey every morning the missionaries led the refugees in prayer and Bible study. When I met with them in Yunnan, they still had to complete the most dangerous part of their escape, the trek further south across the Chinese border. For a fee of $2,000 missionaries arranged for a Burmese drug smuggler to take them to Laos, where I met with them again in another safehouse.

In China Minkyu and the women were visibly scared. When I met them in Laos they knew their journey was almost complete. Minkyu smiled easily during our conversations there. The women were ecstatic and broke into song and dance constantly during the time I spent with them. “I have been eating rice and meat every day since I got here,” Minkyu said. “I am well fed and mentally relaxed.”

I took long walks with the refugees in Laos. We explored Buddhist temples, and in the evenings we sat by the banks of the Mekong River. The refugees knew that in a few days they would have to cross the river to Thailand, navigating yet another dangerous border in the middle of the night. While the women danced, sang and giggled about their dreams for their future lives in South Korea, Minkyu was very quiet during these walks. He would stare across the Mekong, his gaze fixed on Thailand on the other side.

“We are not in the safe zone yet,” he said. “Once we’re out of this dangerous area then I will be more relieved but for now I’m still nervous and mentally unstable.”

His eyes welled with tears when he thought of the mother he left behind in North Korea. “I have to stop worrying about my family in North Korea if I want to do this big job. If I keep worrying, I won’t be able to achieve anything. I know this is for my future. But I miss my mom. Just think about it. It’s not easy to leave your mom behind, is it? For the sake of my future, I must forget her.”

After several days in Laos I said goodbye to Minkyu and the women. They walked me outside of the safehouse, and I wished them luck on the final leg of their journey. After walking a block I turned to look back, and the refugees were still standing there staring at me. I waved goodbye, smiled and blew them a kiss. They all blew kisses back at me; I could tell they didn’t really understand the gesture and were just mimicking me.

They crossed the Mekong to Thailand, where Minkyu remained in hiding with missionaries for almost a year while he applied for asylum to the United States. He had bought a Korean-English language dictionary and began teaching himself English in preparation for life in the U.S. “I want to study well and achieve something big. That is my goal,” he told me. “I want to become a scholar. I want my name to be known by people.”

He was excited to live in the U.S. “Even in North Korea my friends described the U.S. as the best country in the world.”

In September 2011 Minkyu was granted asylum and moved to Richmond, Virginia, to live with his uncle and grandmother, who had escaped North Korea years earlier. I spoke with him over the phone a few days ago. I could sense the happiness and relief in the sound of his voice.

He had been able to send and receive messages from his mother in North Korea. She was very happy to learn her son had made it to the U.S. but was under close watch by the North Korean government because most of her family had “disappeared.” If the government confirms her family has escaped, Minkyu’s mother will be sentenced to hard labor, which in the cold winter months, can mean death. Despite his concern for his mom, Minkyu is relishing his suburban life in Virginia.

“I feel it is all a part of my imagination,” Minkyu said. “Life is so good now, it feels like I am dreaming.”