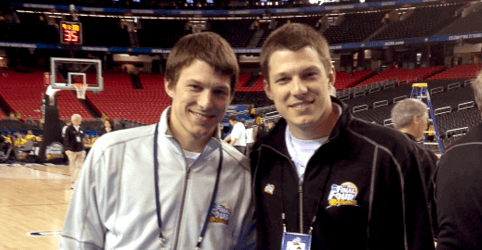 Michael Terry '08 and John Terry '08 recently had the opportunity to work at the Final Four Tournament in Atlanta, GA. As twins they surely have lot in common but now share similar career paths and aspirations. Michael is presently a graduate assistant for the University of Georgia Sports Communications department and will graduate with a Masters degree in Sport Management and Policy in December. John is a graduate assistant in the West Virginia University Athletics Operations department while getting a Masters degree in Sports Management. They agreed to answer a few questions for us about their experience:

How did you come to work at the Final Four?

JT: I had interned with Georgia Tech doing game operations in the summer's following my freshman and sophomore year in college. In December, my contact over there asked if I wanted to come back and work at it. It was a no-brainer to come back.

MT: My boss at Georgia is on the NCAA men's basketball media committee and told me in July that he wanted me to help out at the Final Four. I help out a lot with the publicity efforts of the Georgia men's basketball team, so it was really a perfect fit, and a pretty awesome way to end the season!

What were your duties?

JT: My specific duty was serving as the referee's escort. I, along with three others, provided transportation from the airport to the hotel they were staying at throughout the weekend. The coolest part, though, was driving the officials to the games on Saturday, Sunday, and Monday. In order to get to the Georgia Dome (Sat/Mon) and Phillips Arena (Sun) without waiting through the awful traffic, we had police escorts. Getting to drive through downtown without stopping for stoplights was a pretty cool experience.

MT: I was on the media operations staff. Most of what we did was make sure that the media had what they needed to properly cover the event (both on game days and interview days). There's a lot too it, but I was mainly helping with the distribution aspect. On non-game days, it includes things like transcribing press-conferences and distributing to media. On game days, we do the same for post-game press conferences, but also distributed things like statistics, etc. I definitely got a work-out--the distribution center was nearly a mile from the court, so there was a lot of running back and forth!

How did being there differ from watching it on television?

MT: It was eye-opening to see the scale of the event from the media operations side. The media center took up an entire hall in the Georgia World Congress Center, and the event credentialed well over 500 media members. At Georgia, we have a fairly large media contingent for a home football game, but this was no comparison. It was also really neat to be around some of the best sports journalists in the World (people I've been reading for years).

JT: I think after working in sports for so ling being at an event doesn't really phase you. I'm over the idea of being on the sidelines of a football game or on the court of a basketball game, but the Final Four was different. Standing 30 feet from the court when what might be the largest spectacle in college sports take place was pretty special. I had to stop what I was doing and take it in for a few seconds. The scale of the event, with the lighting, fireworks, HD scoreboards...it was spectacular. I will never forget it (and will hopefully be back again!).

What was your most memorable moment?

MT: The entire weekend was memorable, but it was neat to be able to be able to spend the weekend with John. Since the summer, I had only seen him once (for ten days at Christmas...we both had to work on Thanksgiving) and probably won't get to see him again for quite some time. Though we were doing different things, we watched most of the championship game together so that was pretty neat. I'd imagine that this won't be the last time that we meet up while working at some type of sporting event!

There has been a lot of press around the success of the tournament; would you agree that Atlanta and the venue put on a great tournament? Why?

JT: I think the feedback from the tournament was very good. All of the officials I talked to seemed to have a very good time and said they had heard no complaints. Obviously the traffic was much heavier than normal, but the event brought a lot of people and money to the city. Having the two venues that hosted all three divisions' championships, Phillips Arena and the Georgia Dome, right next to Centennial Olympic Park where there were free concerts all weekend was a tremendous setup.

MT: I've always been skeptical about the NCAA holding basketball games in huge football stadiums (something the NCAA has been experimenting with the last several years). After all, how many good seats can there be? But, this weekend changed my mind. The atmosphere at the Dome was unreal and something that I will never forget (There were actually more people in attendance for these basketball games than football games held at the dome due to the addition of temporary seats). I think it was awesome that they moved the DII and DIII championship games to Phillips Arena to give some smaller schools some more exposure, and from what I've heard, the free concerts were a hit!

What are your future career plans?

JT: Both of us have another year in graduate school for sport management. I'm a Game Operations Graduate Assistant here at West Virginia University. I would like to work in college sports after graduation, but am open to doing anything in the different areas of sport.

MT: First things first, I'm going to finish up my Masters degree in Sport Management and Policy in December. I'll be at Georgia working as a Graduate Assistant in the Sports Communications department through next May and then we'll just have to see. I want to work in communications, preferably in sports so we'll see where that takes me. Maybe John and I will get lucky and end up at the same place, but that might be wishful thinking!

How did your experience at Paideia pave your way to where you are now?

MT: I think a couple things. First, writing is probably the most important thing you'll ever learn. Obviously, the kind of writing I do now is different than the kind of writing I learned in a Catharine Tipton Lit class, but it all helps at the end of the day. I'm so thankful for teachers like Catharine, Martha Alexander and Jennifer Hill (I'm surely leaving out many!) for teaching me along the way. Second, there's no such thing as a bad idea. I think one reason that I was asked to stay on at Georgia was because I really tried a lot of new things when I was a student assistant as an undergrad. Some things worked, some things didn't, but what's important is that you're willing experiment. Finally, relationships matter...a lot. Both John and I were able to work the Final Four (and probably got our current positions) from relationships that built with people over a number of years. I think that Paideia teachers really try to have good relationships with their students, and it’s undoubtedly rubs on everyone.

JT: For me, being able to work at the Final Four was all about a relationship I had over four years ago. I actually originally got connected with my mentor at Georgia Tech by playing ultimate. It's a small world out there. I think a lot of Paideia is about creating and maintaining relationships with not only students, but also alumni and teachers. You never know when you'll cross paths with fellow Paideians again, but it could spring quite the opportunity on you. Paideia really taught me how important relationships are. And maintaining a relationship with a mentor at Georgia Tech afforded me the chance to stand courtside at the Final Four.