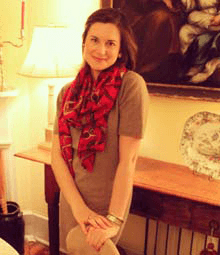 Katharine Wilkinson ’01 explains how she and other Paideia alumni across the city are working to build a community of engagement from around the dinner table.

What exactly is Cities of Purpose?
Cities of Purpose is a new civic venture, launched here in Atlanta last winter. It’s guided by a core belief that places are made by making places at the table, yet too often folks struggle to find their place. So we’re using the essential act of breaking bread together to build a community of engagement in Atlanta – and ultimately beyond.

Imagine this… It’s a Sunday evening. Twelve Atlantans from eight neighborhoods are gathered around an old wooden table in Cabbagetown. One was born in Atlanta; another just arrived three weeks ago. They’re sharing their favorite secret spots in the city. They’re articulating their greatest hopes for Atlanta. They’re exploring what the world would lose if Atlanta were gone tomorrow. It’s a conversation they’ve never had about this place they all call home. New connections are being formed; old relationships are being enriched. Fresh ideas for change are bubbling up. The people around the table feel a sense of place, of community, of belonging. They feel more connected to and more engaged in their city than they did two hours before.

In just the first six weeks of our pilot, 60 such dinners were held across the city, with groups of people gathering together to discuss a shared set of questions about Atlanta’s purpose and potential. Many more have happened since. With each dinner, we create a commons, foster connection and conversation, and plant the seeds of action. There’s an immense energy in the city for the city, waiting to be harnessed. Cities of Purpose aims to do just that – to help people dig in.

According to your website, there are some other Paideia alums involved, too. How did everyone get involved?
For a couple of years, Dar Vanderbeck (recently married to Andy Saxon ’02) and I pushed around ideas for organizing in the city. When the concept of Cities of Purpose was born, Dar did what she does best: rallied the troops. We knew this would be a labor of love, so we needed lots of folks to love on it. Our third co-founder, Jenn Graham, has been with us at the helm. Paideia alums including Mike Walbert ‘03, Gavin Godfrey ‘02, Andrew Haworth ‘01, and Dustin Chambers ‘05 and many non-Paideians have lent their talents along the journey.

What do you hope Cities of Purpose accomplishes?
Cities of Purpose is still an early stage endeavor. The pilot has been very successful. It’s proven that the hunger and enthusiasm for a sustained community of engagement in Atlanta is even deeper than we had anticipated. And we’re getting lots of pull from folks in other cities that want this too.

So we’re now shaping the strategy for Cities of Purpose 2.0 – both how we can scale this “basic” model to places beyond Atlanta, and how we can deepen and sustain a community of engagement here. We hope to pilot an Atlanta Dinner League concept in 2015, expanding the model with restaurant partners and curated topics each month.

When we think about the long-term, we want Atlanta to have the most thriving engagement of any city in the world. It’s a vision grounded in our ethos of social change, our deep hospitality, and our incredible talents. We believe that kind of engagement is critical to the city’s vitality. And we hope we’ll pioneer a model here that can create thriving communities of engagement in places all around the world.

What, if anything, did you take from Paideia that has prepared you for or attracted you to this concept?
In the spring, I spent a couple hours with Miranda Knowles’s social entrepreneurship class. (Great fun!) I never had a short-term class on innovation and social good at Paideia, but I did learn so many things that drew me to and equipped me to play in this space. That you can build the plane while you’re flying it, testing and learning as you go. That there’s enormous power in community and building it is an art. That magic happens when ideas crash up against one another, often in unexpected ways. That our very differences can be what bring us together and help us do big things. That change is a deeply human endeavor and storytelling is key. That every one of us has innate capacity to contribute, and we need all of those contributions. That being part of something bigger than yourself is an honor and a joy.

It sounds like exciting and important work. How can others get involved?
Let me count the ways! Like us, share us, engage with us on Facebook: www.facebook.com/CitiesofPurpose. The pilot is still running, so consider hosting or attending a dinner. I’ve been hosting dinners at Manuel’s, so you can imagine just how simple this can be – no cooking, no cleaning, everyone covers their own tab. And we a have a toolkit that makes facilitating conversation super simple.

As we build out 2.0, we’re looking for three big things. First, funders – Cities of Purpose has been bootstrapped to date, but this next stage requires more resources. Second, partners – organizations that want to attract and retain talent by helping employees find a foothold in the city or deepen their roots here. Third, first generation members – when we launch the Dinner League, we’d love to have Paideia alums be early adopters, helping us test and hone the concept.