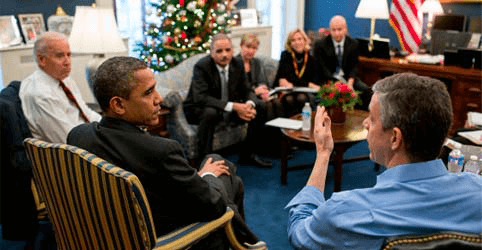 Sarah Bianchi ‘91 works with Vice President Joseph Biden, and most recently coordinated the task force he chaired on the prevention of the gun violence. Sarah recently spoke with us about her work with Biden, the task force and how Paideia helped prepare her for her work.

Please tell us about your position with the White House and Vice President Biden?

I am deputy assistant to the President and Director of Economic and Domestic Policy for the Vice President.

After the terrible tragedy at Newtown, the president asked the vice president to lead a process with four cabinet agencies to determine what we could do to respond. He did not want this to be some government task force that took six months to put together recommendations that collected dust on a shelf, but rather a quick and meaningful response. So we spent the next three and a half weeks figuring out what we could do. For me, that meant coordinating all of the agencies to see what was possible in each area (gun safety, mental health and school safety). We were not starting from scratch - there were ideas that experts in law enforcement and other areas had been talking about for years - like making sure that everyone who buys a gun passes a background check. But we were also able to come up with creative ideas including in areas that didn’t require legislation. One of things we did I am most proud of was an executive action allowing scientific agencies (like CDC) to do research around gun violence. There are laws that since 1997 have purported to ban all gun research, but when our lawyers looked closely at the legislation, we determined it had been over-interpreted. The law said no scientific agencies should promote or advocate gun control. That’s not really what scientific research is so the president was able to issue an executive order directing agencies to start again. One of the things the NRA has been able to do is to block a lot of information about gun violence that makes it harder for people to see what is really going on. I have never been part of any process that had to move so quickly. While everyone was really motivated and helpful, it was grueling and we gave up a lot of the holiday. On January 16th, we had an event with the president and the vice president unveiling all of our proposals – including 23 executive actions. I ended up sitting next to some families who had lost loved ones in Newtown. That was really emotional. And it made all the hours we had given and the time with our families that we had missed, seem pretty insignificant. Instead, it felt like a real honor to do something to respond on behalf of people who had so much taken from them.

How did your time at Paideia prepare you for what you are doing today?

That is easy. One really important thing that Paideia did is to teach me to be able to talk to or work with people no matter who they are - older and younger, famous or not. I don’t have much hesitation about talking to a cabinet secretary about how to reframe their idea or figuring out how to make good use of an intern in my office when we are overwhelmed. The emphasis at Paideia on understanding how to think and learn has also served me very well. I knew very little about guns until about a month ago. But I know how to learn about an issue, how to make good use of the experts, and to produce an outcome. I hate all of the emphasis in our education system today on testing what kids know. It seems you don’t know what life is going to throw at you so it is better to have the analytical skills to be able to manage what comes your way.

I grew up during the Reagan-Bush years, so working in the federal government didn't seem like a way to impact positive change. I thought I would be a teacher or maybe a doctor (although then I realized I don't much like science or blood). I started college around the time Bill Clinton was running and was then elected president. All of sudden our president was talking about things that seemed to really matter - the Family and Medical Leave Act, recruiting young people to public service through Americorps. And I saw there were young people working in those jobs. That is what got me thinking – hey, maybe that's a way to make a difference.

What do you see yourself doing in five years? Five years?

Hard to know. I don't have a grand plan. I just like to see what the interesting opportunities are. After I ran the policy shop for the Kerry campaign in 2004, I knew I wanted a break from government but I wasn’t sure what to do. So I started talking with a lot of the people I had worked with over the years. Some suggested I go to law school. But as my husband pointed out, I don’t much care for rules. Others suggested I try out Wall Street. I talked to the CEO of a new hedge fund. I thought what they did was interesting so I took a job there. Then my husband bought me a book called, "What is a Hedge Fund?" So it's really hard to know what I will be doing in five years. For all I know, it will be in an industry that I haven’t heard of yet.

How do you, as a working mother, hold everything together?

Well, I am not sure that everyone in my life would agree that I hold everything together. But I am able to have an interesting job and spend a lot of time with my kids. There are a few things that make it work at least most of the time. I have a husband who is a full partner in parenting and who keeps our life very organized. We also have a wonderful nanny who helps us arrange the schedule of the kids, ages 4 and 2, so that they can be up later at night when we are home. I am sure I would get slammed on many moms’ blogs for not following some ideal sleep regimen, but they get the recommended amount of sleep in a way that enables me to do my job and spend lots of time with them. Second, my lifestyle is not for people who need a lot of down time or alone time. I have none. After the kids go to bed, I often go back on email to work more. But I am often told I am like my dad in that I really like being around people or constantly doing something. He is known to say that "I am fine spending time alone as long as I have some company.”