Charles Zimmer Tours with The Police 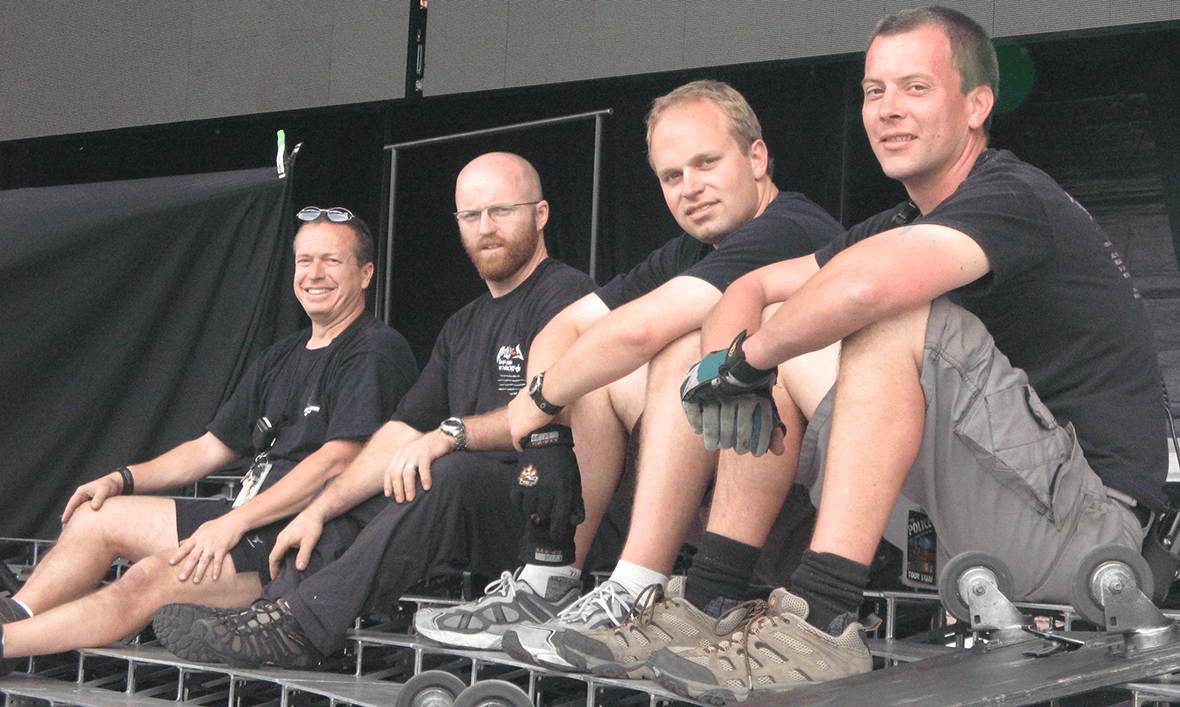 For the past few years, Charles Zimmer ‘02 has worked for the The Police Reunion Tour. We wanted to know more about what Charles does for the tour and the skills that it takes to keep up with such a demanding schedule and the role Paideia played in preparing Charles for the gig.

How did you come to be in the music business?

I was on the tech crew for Jane Harmon’s musicals for six years through Junior High and High School. I also worked with the Maintenance department after school and during the summers. Both of those experiences gave me a lot of the basic carpentry skills, technical knowledge, and common sense that helped me get started in this field. In tenth grade, I met Paideia parent, Bruce Harlan and was asked to help with the Parent-Faculty Talent Show, and the following summer I started to work for his company, Lighting & Production Equipment. That was a great job because Bruce and his staff were incredibly welcoming to me – they really took me in and enabled me to learn a lot. I still enjoy working with Bruce whenever I get the chance when I’m in town, and he and his staff are great friends of mine.

My senior year in high school, I got an internship working at the Music Midtown festival. That turned into a job the following summer, and since then I’ve been working pretty much full time for Live Nation. While I was in college at Emory I worked as the Assistant Production Manager for Music Midtown for 3 more years – that was always a challenge trying to balance classes and a full time job, especially since the festival was always held during final exams at Emory! During my last two summers took a job as the Production Manager at the Tabernacle, where I stayed for a year and a half before taking my current job with The Police.

While I was at Emory, I was also very involved with the Student Programming Council, planning various events for the student body, and I’ve continued to consult with Emory on production for various shows and special events.

I’m currently employed as a carpenter on The Police World Tour. Along with the other five touring carpenters, I’m responsible for setting up and tearing down our custom performance stage at each venue. It takes us about two and a half hours to assemble the stage and one and a half hours to disassemble and pack it after the show. I’m also responsible for helping to setup the dressing rooms for the artists in each city. I also have various other duties related to the tour logistics and I maintain a website with information about the tour for the local promoter representatives in each city to facilitate the exchange of information between the tour and the local staff who help us produce the show in each city.

One great thing about The Police is that since it’s such a big tour, I’m able to work with some of the very best people in the touring industry, so I feel very privileged to be a part of that. Even though you fall into a routine of setting up the show, everyday is a little bit different and I love meeting new people in every city and feeling like I’m learning something new every day.

The Police had the top grossing tour of 2007 and it’s amazing to see how much money is generated from our hard work. I don’t see a lot of up-and-coming acts these days who I think will be able to reunite in 25 years and still sell out stadiums.

Describe a day on the road?

I love my job and have a lot of fun with it, but it’s not quite as glamorous as people sometimes think. The Police are a great band to work for, but a tour of that size is a lot of work and it means that we don’t have much time off. A typical day is anywhere from 12-24 hours working.

I typically get up around 5:00 am. Depending on where I am in the world and what time it is at home, I’ll check emails or make phone calls. At 6:00 or 7:00 we’ll meet in the lobby of the hotel and ride in to the venue. The actual work begins at 8:00 am when we start unloading the trucks. We have about 18 53 foot trucks full of gear that we take with us everywhere. Once the first trucks are unloaded, we begin to build the set. During the show, I’m responsible for calling several cues we run with the percussion riser. The instant the show is over and the band is off the stage we go to work tearing it all down. The carpenters pride ourselves on working faster than any other department. If all goes well, the whole show is torn down and packed back into the trucks in two and a half hours. Once we are back on the tour buses, we are on our way to the next city where we will get up and do it all again.

How has Paideia influenced your career path?

There are obviously a lot of practical ways Paideia influenced my career path-everything I learned in the theater ad working with the maintenance staff, the connections I made learning from ant working with Paideia parents like Erik Magnuson and Bruce Harlan, and ultimately the introduction which led to my job at Music Midtown and my career in big-business concert production. In junior high, John Greene exposed me to a whole variety of musical genres and different eras of rock and roll. More generally though, Paideia taught me and helped me develop a lot of the less tangible things that continue to help me. My values, my work ethic, my problem solving skills and the ability to be open-minded, flexible, and adaptable, and my intellectual curiosity-these are all things that really got set in stone and well developed during my time at Paideia.

What advice would you give Paideia students who are interested in working in the music business?

There are so many different jobs in the music business and so many bizarre ways that people end up in the business that it’s hard to pigeonhole it. The people I’m working with come from incredibly diverse backgrounds. My boss, the lead carpenter, used to build nuclear submarines for the Navy and right now he’s working on a PhD in some sort of advanced engineering. He’s quite possibly the smartest person I’ve ever met. Another carpenter has two masters degrees-in History and Film-one has a Theater degree, I have a degree in Political Science, and one guy never attended college.

I think it’s difficult to entirely plan your way into the music business because, fair or not, a lot of the best opportunities come from being in the right place at the right time and knowing the right people-not necessarily family connections, but the people you meet along the way.

Put yourself out there-if you want to work in production, try and get a job as a stagehand so you can see how things go together, or offer to work in a warehouse for a local production company. Get involved in college-most colleges have programming boards that produce concerts and other events and that’s a great way to get some exposure to various aspects of the entertainment industry. Most entry level jobs in the music business aren’t very glamorous-you might be sorting mail at a talent agency or coiling heavy cables in a hot warehouse-but you have to be willing to put in that time doing the grunt work without thinking it’s below you. If an opportunity arises, make the most of it. I got my job at Music Midtown because I worked harder that they expected from an unpaid intern, but it paid off and the next year I was entrusted with a huge amount of responsibility at the festival.

What have you done thus far of which you are the most proud?

The most rewarding project I’ve done was helping produce the public address of His Holiness the Dalai Lama at Centennial Olympic park last October. Starting about eight months before the event, I worked with Emory University to help them select vendors for the event and I continued to consult with and advise the university while I was on tour with The Police. This was probably one of the craziest scheduling problems I’ve ever had to work out. The last two weeks before the speech, I spent 8-14 hours a day on the phone from Europe making final arrangements for the Dalai Lama’s visit. We did our last Police show in London, loaded out, and I immediately got on a plane to Atlanta. I landed and drove straight from the airport to the park to finish loading in. I went home eventually, showered, slept for two hours, and then was back at the park at 5:00 am on the day of the speech, just in time for it to start raining. It was exhausting, but it was an event I was really proud of, and I can’t really think of anyone more rewarding to work for than His Holiness. I was incredibly blessed to be able to meet His holiness before he left Atlanta, which I’d have to say is one of the coolest experiences of my life. People ask a lot about meeting celebrities…nobody I’ve ever met comes close to the Dalai Lama.

The entertainment industry is sometimes dismissed as trivial, but I think it can afford a lot of opportunities to do good. Besides the Dalai Lama event, I worked on a relief concert after the Indian Ocean tsunami in 2004. We produced a show in Kuala Lumpur, Malaysia and raised a little over $8 million to go toward the relief effort, while also trying to help jump start some opportunities for concerts in Malaysia, where they don’t get a lot of major tours.

What is your plan when the Police tour ends?

The Police tour just ended and I'm currently on tour with Luis Miguel. He's a very popular Latin artist (#2 top selling Latin artist of all time), but he's not as widely known in mainstream pop because he sings in Spanish and unlike Ricky Martin, etc., never did a big English-language crossover. I had six days at home between The Police and the start of this tour, all six of which were spent in feverish preparation for the tour…there was actually a month where I was overlapping working on the last part of The Police tour while doing advance work to prepare for this one.

This tour has me back on the administrative and management side of things, after 16 months as a carpenter. I am the Production Coordinator for the tour, which means that I am responsible for assisting with all of the production details for the tour, coordinating all of the crew movements and travel, and managing the tour office day-to-day on the road. I'm glad to be back on the administrative side of things, but there are two disadvantages…I miss doing the load outs, which are the best workout you can get, and I miss having real days off; with this job even on non-show days there is always work for me to do.