Paideia is a school of people with a lot to say. Over the years, teachers, students and staff have expressed themselves in speeches and articles on wide-range of topics related to education and community and Paideia.

Learning not to Jump off the Structure, and other essential lessons of growing up

At the periphery of a vast playground, two teacher aides hover by double doors leading into the brick building.  Out on the green, one batch of children, inspired by a Winslow Homer painting, hold hands while running in an arc.  The boy on the end is catapulted through the air.  Another group of children plays kickball.  A third has settled in at the ubiquitous swing set, daring children running between the arcs of the swingers.  Four girls practice back handsprings.  The two aides swap casserole recipes and ignore the students.

Children have returned from school, via bus, and walked the remaining distance home unattended.  Snack (cookies and whole milk) is followed by a wave goodbye from parent.  Children go outside.  The youth of the neighborhood, ranging in age from 5 to 15, gather in an open space — a field, perhaps, a large backyard or an empty lot.  The older ones suggest entertainments.  Two girls pull away to play jacks.  One boy with a Superball lures a buddy away to see how fast the ball scoots on the second jump.  The remaining 12 settle on a game of Kick-the-can.  Not a single adult is in sight.

There is laughter.  There are tears when the Superball hits a younger boy in the eye, but his brother tells him to buck up.  He does.  An hour passes.  Kick-the-can morphs into a game of soccer.  Nearing the dinner hour, the sound of pealing bells penetrates dusky air.  Time for dinner.

Atlanta, present time, on a weekday…

Small neighborhood parks stand empty except for a few nannies tending charges. Backyards are barren but for the occasional landscape crew.  Parks with larger fields bustle with organized teams that kick or chase balls or hurl frisbees. YMCAs and recreational centers teem with children, many in colored jerseys.  Coaches cajole.  Parents wait in their cars, arranging schedules and plans via text message.

Other children, back at home, play inside.  The most fortunate are experiencing a playdate — a word that did not exist in 1978 — which means that parents arranged by phone or e-mail to congregate their children at a desired time.  The parent of the host child is downstairs now, contemplating the homework ritual soon to come.

The children are supervised and safe.

In my neighborhood, I rarely see kids playing outside.  Play — loose, sloppy, fun — is less evident in our city now than it was 40 years ago.  But in schools that chose not to abandon recess--as many have done in the past decade or so--Recess is core curriculum.  Just ask my son. 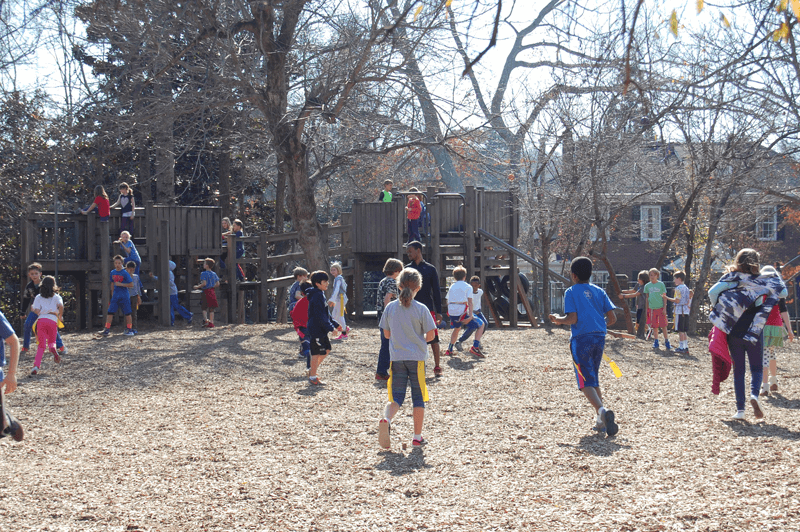 “How was school today, Hayes?”

“What was the best part?”

Play is fun.  Great fun, even.  And it is essential as well.  The routines of most Paideia students are structured and dictated by teachers and schedules, no matter how child-centered we try to be.  While that is especially true of school, it is increasingly true of the lives our children lead outside of school, too.  After school activities organized by adults have become the norm rather than the exception.  There are many factors contributing to that shift in children’s lives: a different perception of safety that has evolved over a generation or two, busier streets, more homework, less connectedness in neighborhood communities among adults, longer work hours, compelling technological devices that work best indoors over wifi.  Whatever the cause, the result is that children play less today in the outdoors without adult control than they did 40 years ago.

For many of our students, recess at Paideia is the only time of day they will be with groups of peers in a way largely unstructured by adults.  So much happens!  Spend a few afternoons out on the woodchips beside the MAC if you doubt it.  It’s amazing!  (Do beware of lofted projectiles.  Unsuspecting adults have an uncanny ability for getting brained by an errant frisbee.)  From a safe vantage you will see, most commonly, children blowing off steam through big, physical play.  They run, they throw and catch and kick.  They tag each other and run some more.  But there is more going on than just aerobic release.

Some of the most important lessons of recess happen in the burble of activity that does not reach an adult’s attention.  A student has to grapple with the disappointment of not winning.  A child has to mend a friendship he damaged in a science lesson an hour before. Two girls chatter gibberish to each other and bond while giggling.  Five kids attempt to skirt the entire playground without stepping on any woodchips, strategizing the whole way.  A boy has to leave the four square court even when he did not believe he was out; if he perceives he was treated unfairly by the group, he must decide whether to stay with the game, confront the students, ignore and suffer, tell a teacher or push and shove.

Inside the classroom, when two kids enter into conflict, teachers intervene.  If we have time, we bring them aside and help them work it through.  Other times we quash it, lest the whole group’s mission be diverted.  Similarly in after school activities, linear-focused adults have a goal they want to achieve in the time they have with kids: teach them 10 new chess moves or how to defend against a corner kick.  Recess, though, is not linear.  It’s organic.  Games grow, evolve, falter, break apart.  Children butt heads, repair or nurse grudges, challenge themselves, bond.  Out on the woodchips or basketball court or structure, they have room and time to figure out what they like, how they want to be, and who brings them joy.

Sometimes they choose wrong.  Every teacher has had to abandon a lesson after recess to process an injustice so fresh in so many children’s minds that the lesson on the schedule cannot proceed.  More common, though, is a smarting wound that gets exposed during dinner table conversation at home, or just before bedtime.   The development that comes out of those intrinsic conversations is part of the organism that is Play, and, its most fruitful consequence.  Real learning is real growth, and real growth can be messy.  It sometimes hurts.  Remove the potential for that pain, and you also remove the opportunity for the growth.  It’s easier for teachers to witness a child’s angst on the playground (or soon after coming inside) and interpret it as a Teachable Moment than it is for loving parents who hear about the incident long after it has inflicted the pain. It has been hard for me as a parent not to swoop in, contact the teacher, and sort the problem out for one of my boys when he had a conflict at school with another child.  I see their pain and feel my own.  I want that pain to go away or at least never arise again, even as I know that working through age-appropriate conflicts is part of the work of growing up, and it can yield such powerfully positive results.  Sometimes I have chosen well, and sometimes I haven’t, and in the latter case, I allowed my parental compassion to interfere with my child’s growth.

At the extreme, a caregiver who hovers too much and too closely is labeled a Helicopter Parent.  Study after study in the last several years has indicated the dangers of such over-parenting.  It tends to produce teens who are more anxious, less socially skilled, more likely to be depressed than their less-parented peers.  But where does Compassionate Parenting end and Helicopter Parenting begin?  That’s a hard one, particularly so because the line of demarcation moves as a child gets older, and isn’t the same for every kid the same age--even siblings!  But there is no doubt that our culture has shifted in the Helicopter direction of the continuum.  When I want to interact with my child’s teacher or an administrator, I simply have to reach into my pocket.  I marvel at how much different it was for my parents, whose contact with my teachers most years didn’t extend beyond the Report Card sent home twice a year.  That’s not to say 1978 was idyllic for kids.  Parents could be so negligent it would be almost criminal today.  When I was eleven, I snuck a hatchet out of my garage, met my buddies in the woods, and started felling towering pine trees in order to construct a log cabin.  Was it fun?  Oh, yes!  Could it have gone really, really badly?  Hmmm….  As it happened, it turned out okay for me on the whole, but I’m sure that it did not for some of my peers.

I think when I’m being the best parent to my boys, I’m mindfully living with tension.  I want to keep my kids safe, and I want my kids to develop a sense of personal agency when they work things out without me. I can’t just give in to one impulse or the other.  That tension shows up for me every day: when Hayes (10) struggles with a piece of math homework, when Keyes (15) asks to take a Lyft ride home at 11:00PM on a Friday night from a gathering with buddies, when Jack (18) navigates the many steps of the college application process.  The tension has shifted enormously since the days when I’d follow a few steps behind them at Candler Park playground, but if I can learn anything from the older parent friends of mine who have children in their twenties and even thirties, the tension isn’t quite ever going to go away.  Parenting always involves a dance, and the footwork is complex.

Which brings me back to Recess, an institution I appreciate even more today than I did when I first started teaching a quarter century ago.  Recess is the Middle Path if there ever was one.  Kids get up to all sorts of activities in a large but boundaried space.  They can run around plenty, but not over other children.  They can split a knee, bloody a nose, even break a leg (Hayes, jumping off the structure last year), but generally, the problems they encounter are good ones to learn from (i.e., don’t jump off the structure).  If a situation gets out of hand, there’s always an adult in sight.  Problems arise constantly, but for the most part the children navigate solutions without us teachers.  For many of them, it will be the most memorable part of their entire day, and perhaps, too, the most educational.

Mostly, though, recess is a joy-filled time.  For the release of tension alone, it would be time well spent, but given how much more potential for growth that it offers, it is truly essential.  Recess isn’t enough for kids to grow into self-actualized young adults, but it moves children in the right direction.  Hopefully the adults in those children’s lives will figure out how to keep nudging them along as well without taking the work away from them.

Over the years teachers and students have volunteered to discuss one aspect of their lives important to them. A slice of their life. 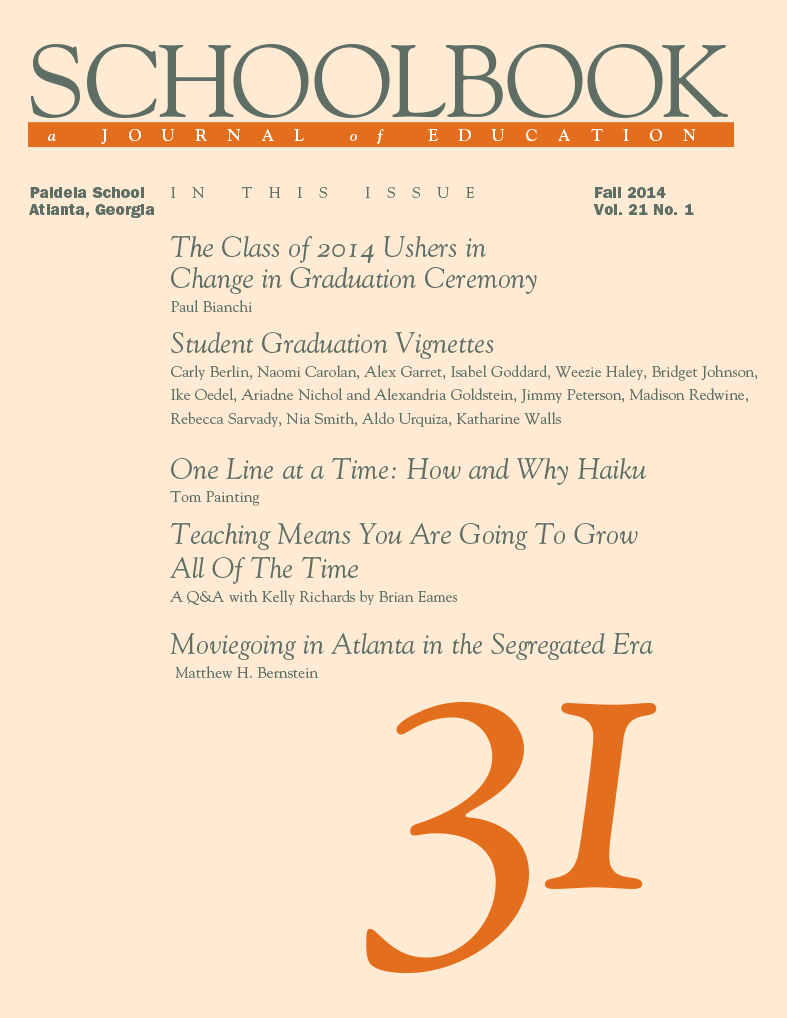